Although the Council is the overall policy maker, it is not involved in the execution and day-to-day running of the Institution. It functions in accordance with the Polytechnic Laws. Complaints from staff and students on any matter whatsoever, and where necessary, are referred to the Council through the Registrar, who is the Secretary of the Council.

The Governing Council functions effectively through committees into which their members are constituted. There are:

However, the Governing Council has the power to constitute Ad-Hoc Committees as deemed necessary from time to time.

MEMBERS OF THE POLYTECHNIC GOVERNING COUNCIL

The Governing Council comprises a number of distinguished academicians and professionals as members.  Its composition, conduct and affairs shall be directed by the Proprietor of Ronik Polytechnic. 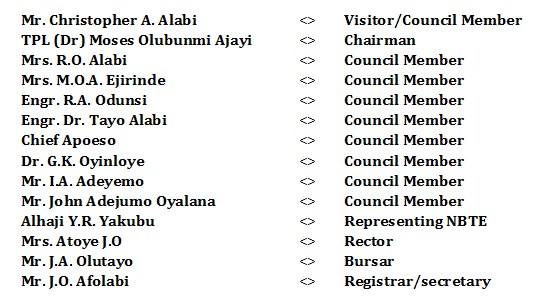 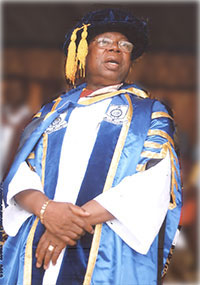 Mr. Christopher A. Alabi obtained B.sc (Hons) in Sociology from University of Ibadan in 1971.

He joined Nigeria Explosives and Plastics Company Limited, Lagos where he served in various capacities, rising to the position of sales Manager before he resigned to join others in promoting the formation of Cakasa (NIGERIA) COMPANY LIMITED a foremost and pioneering indigenous engineering procurement and construction firm with special focus in the Oil and Allied industries.

Mr. Alabi’s vision became actualized when he became the Managing Director of CAKASA. Up till December 1997, Mr. Alabi was the Managing Director Vice Chairman of this unique indigenous oil servicing company when he voluntarily moved to CASCHE NIGERIA LIMTED, a wholly owned subsidiary company of CAKASA involved in maritime business, as the Chairman/CEO. He also served as the Vice Chairman of CAKASA (NIGERIA) LIMITED.

He is the Chairman CARONC Group of Companies and RONIK International Group of Schools. 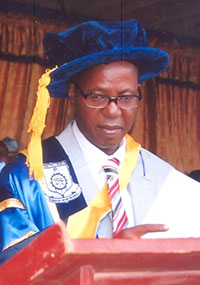 TPL, (DR) Moses Olubunmi Ajayi graduated from the University of Ibadan, Nigeria, with a B.sc (Hons) in Geography in 1971. He was awarded aCommonwealth Scholarship to undertake a Master’s degree in Urban and Regional Planning at Sydney, Australia, which he completed in December, 1974.

He worked briefly as Pupil Surveyor in the Federal Surveys, Lagos. He was seconded to the Central Planning Office of the then Federal Ministry of Economic Development in 1975 as a Planning officer Grade 1 with responsibility for Housing and Urban Development Policies for Nigeria.

He left the civil service and functioned as a Planning and Development Executive in the Estate Surveying firm of Onakanmi and Partners from 1976-1979. He has since been the Managing Partner of MOLAJ CONSULTANTS, a human settlement and development consultancy outfit. On the Professional side, he served the professions in various capacities: Chairman Lagos State Chapter (NITP); National President (NITP); President (APBN); Board Chairman, Ifelodun Local Planning Authority, Ikirun (Osun State); Ifako-Ijaiye Local Planning Authority, Lagos.

He was a member of the Governing Council of the Polytechnic, Ibadan (1980-83) and chairman of the Satellite Campus Committee which were built in Iree, Esaoke, Shaki, Eruwa. He is currently the chairman of the board of Baptist College of Theology, Oyo. 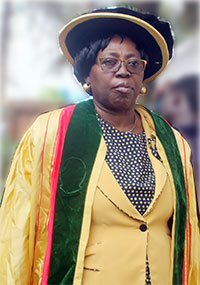 She is the Managing Director/CEO of RONIK International Limited, a group of schools providing standard education and training at primary, secondary and tertiary levels. She serves on the Board of various organizations including the CARONC Group. 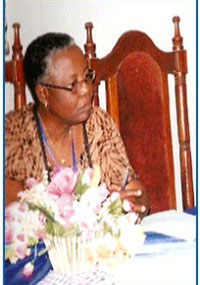 Mrs. Ejirinde is an educationist of over forty-two years experience as a subject teacher and administrator. She had her education at the famous Queen’s School Ede/Ibadan and the University of Ibadan where she obtained a Bachelor of Science degree in Geography and a Masters degree in Business Administration. She is also a graduate of Pan African University, Lagos (Lagos Business School). She enjoined Federal government scholarship throughout her secondary and University education having distinguished herself as a brilliant, diligent studious student.

She had worked as a teacher and administrator in many schools where she had put her wealth of experience at the disposal of students. She has attended several courses both in Nigeria and overseas. She is currently the Principal of Ronik Comprehensive School, Lagos State. 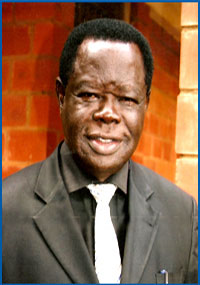 Engr. Rufus Abayomi Odunsi is a graduate of University of Lagos where he obtained both his Bsc and M.sc Eng. (Structure). He is a member of many professional bodies such as : Institution of Civil Engineers, Great Britain;  Council for the Regulation of Engineering in Nigeria, COREN; Nigeria Society of Engineers, NSE among others.

He has served as Supervising Engineers; Projector Director; Site agent and Project Manager at different times. He is a consultant in structural Design of buildings of varied nature, sizes and utilization to all the tiers of government in Nigeria and also to private organizations and individuals. 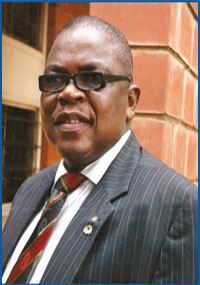 He is a fellow and Past Vice President Nigerian Institution of Structural Engineers (FNI Struct E) (2008-2009). He is also an Examiner with the Institution. Engr. Tayo Alabi is a Board Director in many organizations. He is a Rotarian. He served as the R1 District Governor from July 2009 to June 2010. 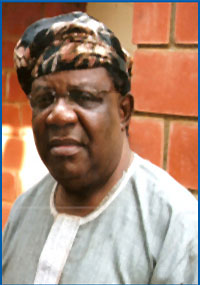 Chief Apoeso is the Managing Director Nigerian Pharmaceutical Promotions Limited. He attended Ekiti Parapo College, Ido – osi and Methodist Boys High School, Lagos. He later proceeded to University of Ife (Ibadan Campus) where he obtained B. Pharm (Hons). He had his internship at the State Hospital Akure.

He worked with West African Drugs Company – John Holt Group as a Manager in Training. He later joined Sandox Limited as a Senior Medical Representative.

He joined Nigerian Pharmaceutical Promotions Limited as a National Sales Manager and rose to the post of Managing Director.

Since then, he has been involved in various importations of both pharmaceutical and chemical and materials among others. 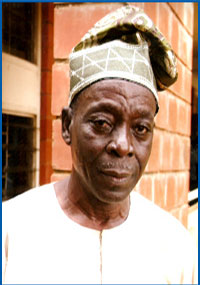 Dr. Gideon Kolawole Oyinloye is a lover of education, a teacher and on educational administrator of many years of experience Educated at the St. Peter’s College Kaduna,, the Alhamadu Bello University Zaria and the University of Ife (now Obafemi Awolowo University).

He was the sole representative of Kwara State in planning the Universal Primary Education in 1973/74.  He was a member of the Governing Council of the College of Education Ilorin for about a decade.

He had the opportunity of lecturing at the Bethel College Mishawka Indiana USA (Aug – Dec 19990) and the Mountain View College Didsbury, Alberta Canada (Jan – April 1991) during a sabbatical year.

He was also at different times part-time lecturer in Education at the Alhamdu Bello University Zaria, University of Ilorin and the University of Lagos COSIT Programme Ilorin centre.

On retirement from the public service in 1993, he was appointed General Manager Chrisland Educational Organization, Opebi Lagos and later became the school Administrator, Caleb International Schools Ikosi Ketu before joining the Ronik Polytechnic as the pioneer Rector of the Institution. He played a modest part in securing the Polytechnic Operation Licence in December 2003. He disengaged from the service of the Polytechnic in July, 2005.

He is on the board of Ronik Comprehensive School. He is a consultant of educational matters. 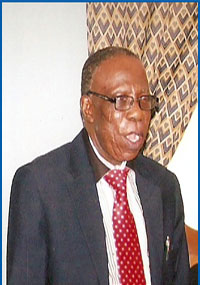 Mr. Isaac Adebisi Adeyemo has B.S.c (Hons) in Business Administration from the University of Lagos in 1985. He also holds an Ordinary National Diploma in Accountancy from the Federal Polytechnic Ibadan in 1976. He is an Associate Member of the Institute of Chartered Accountants of Nigeria and Chartered Institute of Taxation of Nigeria.

He has various experiences in administration, accounting and Auditing. He started his career with Caronc Holdings Limited and Ronik Group of Schools in August 2000 as the Group Internal Auditor. He has also held other positions such as Group Internal Audit Manager, Group Corporate General Manager and Financial Controller of Ronik Group.

Mr. Adeyemo is currently the Company Secretary and the Executive Director of Finance for the Group.

He is the current Chairman of Chartered Institute of Taxation of Nigeria, Lagos District Society. 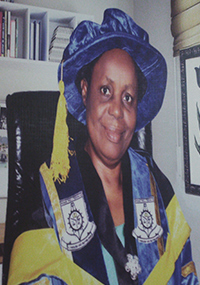 Mrs Atoye holds a B.Sc degree in Accounting from University of Lagos and MBA from Obafemi Awolowo University Ile-Ife. She is an Associate member of Nigerian Institute of Management and a fellow of the Institute of Chartered Accountants of Nigeria.

She has diverse experience in accounting and lecturing within and outside Nigeria spanning a period of over 30 years. 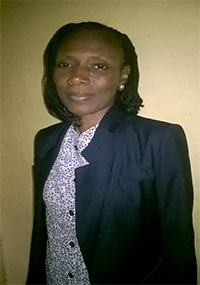 Mrs Arit Aikpo Oluwafemi (nee Usang) holds a Masters Degree in Accounting and an Accounting Technician certificate with Phd in view. She has garnered close to fifteen years of work experience in Clerical, Accounting and Management Accounting. She started her working career as a cashier at the defunct Mercantile Bank of Nigeria Plc. she later worked at Sheeting Section at the Nigeria Security Printing and Minting, Lagos. Later she worked as Accountant at the Swiss Nova Chem, Gbagada, Lagos.

She has also served as Adjunct Lecturer at the Yaba College of Technology and Distance Learning Institute, University of Lagos, Akoka. 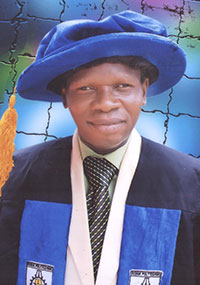 Mr Afolabi holds HND in Secretarial Studies from the Federal Polytechnic, Ilaro, B.Sc degree in Business Administration from Houdegbe North American University, Benin Republic and MBA from University of Calabar. He is a Member of the Nigerian Institute of Management – Chartered. He has been in the higher institutional administration for over 10 years. 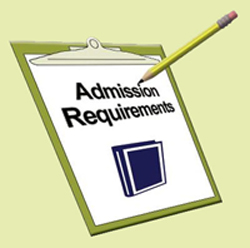